It all started with what seemed like a passing thought…maybe a dream…a dream of a dream even. Highview Spencer County Campus had been meeting in a school facility for over 6 years. If you have ever had anything to do with “mobile ministry” you know that 6 years of setting up, tearing down, driving/parking trailers, maintaining/replacing mobile equipment, moving last minute due to school schedules, etc. can feel like an eternity. As grateful as we were for all that God was doing through a temporary location, we were ready for  Him to provide a permanent one. So we began to pray intently for just that. That’s where the journey began…

In the Fall of 2011, a visitor we had never seen before came to attend one of our Sunday services. None of our staff recognized her, but as it turned out she was the neighbor of one of our members. As they greeted one another, the lady let our member know that her church (Parkland Hills Baptist) met on the other end of town and that they were in the process of praying about God’s next steps for them. Their pastor had retired and they were coming to the end of a mission agreement with their mother church (Parkland Baptist in Louisville) and didn’t know what the future might hold. I’m not sure who initiated what, but the end result of that conversation was a phone call to me asking if I might be interested in talking about a potential partnership.

My first call was to this lady to see what kinds of ideas she might have in mind. My next call was to the only staff member listed on Parkland Hills’ website, Mike Gross (currently an RH member). Through these conversations, it was unclear to me what any kind of partnership might look like. There was of course no handbook or paradigm for the kind of conversation we were having, but we continued to pray. I remember laying in bed one night with Kyndra literally unable to sleep thinking about the possibility of our congregation somehow partnering with Parkland Hills in a way that might enable us to become more permanently rooted in Spencer County. But this would have to be a work of God. It would be entirely up to Him to make something out of this “nothing.”

Over the next few weeks, I began to get word from more contacts about this conversation. Chief among those was Pastor Tom Curry of Parkland Baptist Church. Tom and I met for coffee the Wednesday before Thanksgiving 2011 and started tossing around some ideas for what a potential partnership might look like between Highview Spencer County Campus and Parkland Hills Baptist Church. If memory serves me well, the idea that was born from that meeting is what would eventually become Redemption Hill Baptist Church! In subsequent conversations with the leadership at Highview, it began to become more clear that the Lord was up to something special. Over the next few weeks and months it was decided that Highview and Parkland would embark on a joint-venture to plant a new autonomous church on the edge of Spencer County. 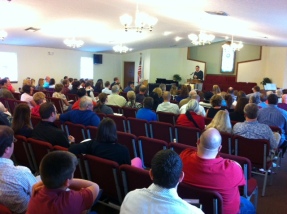 (First joint-service with both congregations together)

God had answered our prayers, but we had a lot of work to do! Those who were there early on remember that much of this work was somewhat tedious. We formed a “Vision Team” comprised of representatives from both congregations to start laying out what this new church plant might look like. Constitution, by-laws, mission statement, core values, church covenant, leadership structure, etc., all of this had to be hammered out and agreed upon before we could move forward. Much of this work was also very physical. The space needs of Parkland Hills were starkly different than those of our Highview campus, so there was a TON of renovation to do. 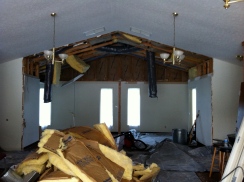 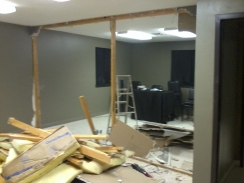 Finally after months of HARD structural work (both physical and organizational) and the addition of yet a third congregation into this venture (shoutout to you Gathering peeps!) Redemption Hill was born! 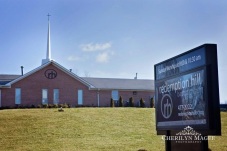 In June of 2012 we began our “core group” phase during which we inducted our initial charter members. Then, in August of 2012, Redemption Hill officially went public. The only words I can think of to describe the ride from that point are “hold on tight.” It is absolutely amazing to look back through these pictures and think about all that God has done in this place over the nearly 3 years we’ve been together as a church. The ministry that has been accomplished, the moments we’ve shared, the memories we’ve made, and the lives that have been changed. It is purely a work of God’s miraculous grace that has brought us to this point. And as the song says, it is this same miraculous grace that will lead us home.

This past Sunday we celebrated (I use that word loosely 🙂 my final Sunday preaching at Redemption Hill. Thank you so much to all who made this such a special day for us. Thank you for your kind words of encouragement, your thoughtful cards and notes, your generous gifts, but most of all for just being Redemption Hill. I looked around Sunday morning and resonated with the Apostle John’s words in 3 Jn 4, “I have no greater joy than to hear that my children are walking in the truth.” The greatest gift I could have (and did) receive as an out-going pastor was to simply see your faithfulness, heart for the Lord, and love for His church put on full display!

As we begin this new chapter of our lives and ministry, we do so knowing that we have the greatest church in the world behind us praying, giving, and going to help advance this good news alongside us to the ends of the earth.

Thank you Redemption Hill. To God be the glory, great things he hath done!

One thought on “Thank You Redemption Hill!”