These are words I have found myself uttering time and time again throughout this process of calling, assessment/appointment, and now deployment. It seems that around every corner there has been yet another connection linking our family to the work that has been done and continues to be done in Zimbabwe- Connections that at times seem so random and yet so providential that all we can say is, “Small World, But No Coincidence.”

One such connection came about through a series of email exchanges I had a while back regarding shipping theological resources to Africa. At the time, my interest was motivated by the situation at the Baptist Theological Seminary of Zimbabwe (BTSZ- I will explain more on this situation in a later post) and the need to rebuild a solid theological library there. Some friends of mine and I were able to collect a relatively small amount of resources and carry them over by hand, but this strategy would not be workable in the long run as it was both cumbersome and expensive. But as God’s providence would have it, I was soon able to get connected with a ministry called Book-Link International. It’s founder and president Olin Williams and his wife Ernestine are retired school teachers, but in their twilight years have been passionately committed to gathering, sorting, and shipping theological/educational materials overseas for over a decade. Book-Link is truly global ministry, but is based not far from where we live, right here in my home state of Kentucky!

In my desire to send more resources overseas, and specifically to Zimbabwe, I contacted Olin. It was then, in one of those “Small World, But No Coincidence” moments, that I learned Olin and Ernestine were not only committed to sending resources overseas, but had actually served a term as Master’s missionaries with the IMB in Zimbabwe from 1998-2000. During that time, Olin established a great relationship with BTSZ and was in fact currently in the process of collecting materials for a container to be sent there in Summer 2015. It is amazing to see the way God works out His plan in His timing. This container which Olin has been laboring for years to fill will contain thousands of volumes that will now likely arrive right around the time my family hits the field to begin the task of theological education. The Lord indeed provides for His work!

As though this gift weren’t enough, one final touch of God’s goodness was an offer Olin made. He asked if I had any personal resources I would like to ship to Zimbabwe but didn’t want to pay to ship myself. Little did he know he was asking that question to a certified bibliophile (“lover of books,” a.k.a. any Southern Seminary student) who had been frantically looking for an option to take my resources overseas with me when we go. In God’s good kindness, through the efforts of Book-Link International, I was able to pack up my entire personal library and it will be included in the container headed to Zim this summer (below is a pic of part of this shipment with me standing in front for scale). 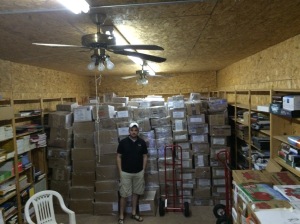 Last Saturday, a group of men from Redemption Hill helped me pack up these resources and transport them to Book-Link’s headquarters in Eubank, KY (thanks Daniel, Dave, Mason, and Seth). Then this past Thursday, a couple of us returned to meet and help unload a shipment from Southwestern Seminary. A group of the faculty there (led by Dr. Brent Ray) had collected an entire U-Haul truck-load (shown above) of volumes to send to BTSZ. Another “Small World, But No Coincidence” moment came when we realized that the driver of the U-Haul was an SWBTS student who was commissioned as a new Missionary alongside us last week here in Louisville! The Lord continues to use His people in providential (and non-coincidental) ways to provide for the work He plans to do. Please pray that this shipment would make it in one piece to its destination, free from weather damage, theft, and/or exorbitant taxation!

And while you are praying, be sure to thank God for Book-Link International and for faithful servants like Olin and Ernestine Williams who (well into their retirement years) are still tirelessly and faithfully serving the Lord for the sake of His glory among the peoples of Zimbabwe.

One thought on ““Small World, But No Coincidence!””