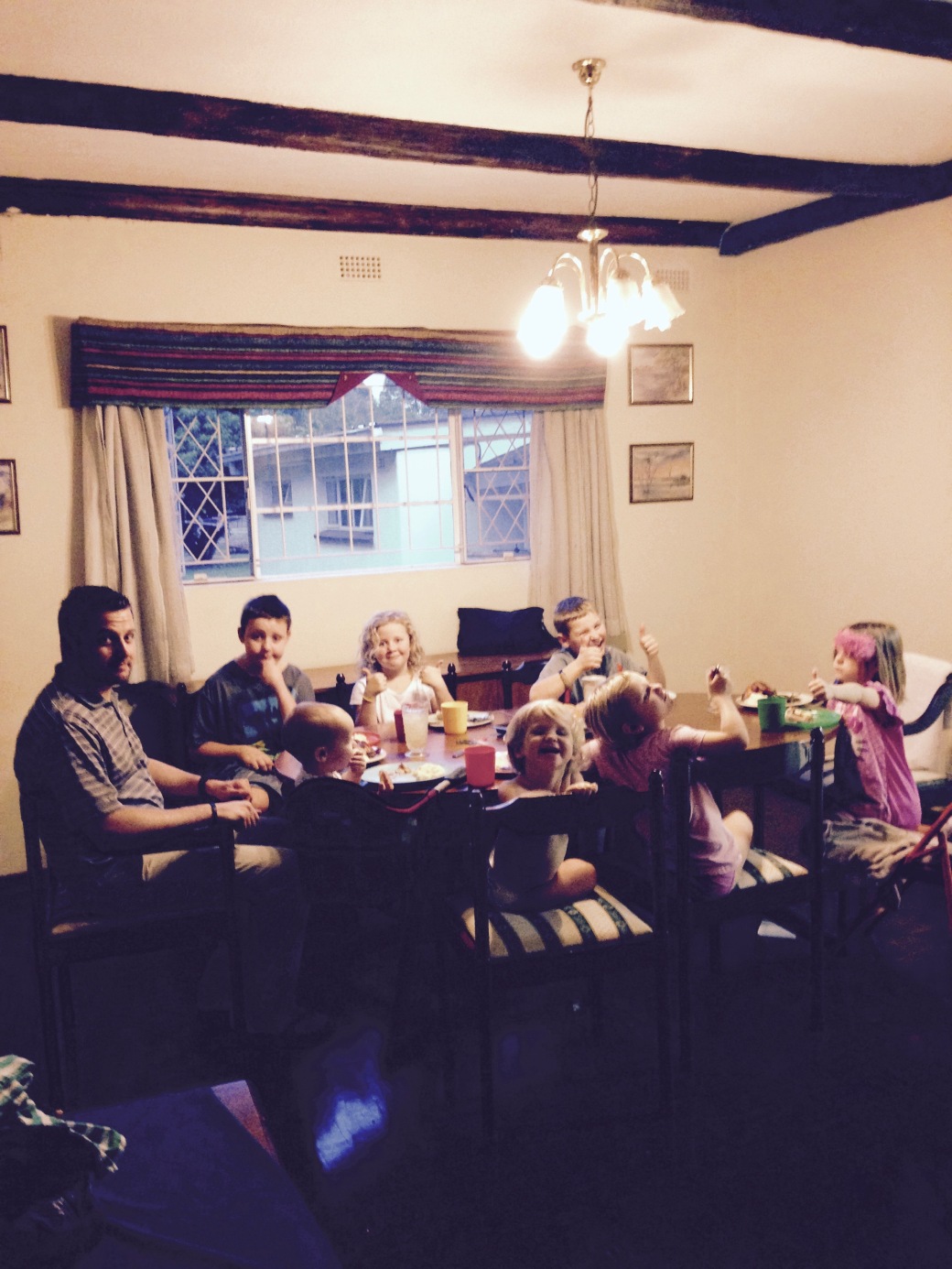 “I hate it here. I’m uncomfortable and I feel like I have no control of anything. I can’t even ice. I’m writing this and being honest so that if and when you change my heart and call us here, I’ll know it was you.”

This is an excerpt from a journal entry from when I visited Zimbabwe in November 2013. God had made it clear that He wanted my husband to go to Zimbabwe and train eager-to-learn pastors. Nick had taken several trips to teach at the Baptist Theological Seminary of Zimbabwe and after his 6th trip or so, he said he was ready to move there and meet the need that seemed to be increasing with each trip.

I told him that I’d happily let him use our money and I’d keep the kids alive while he continued to go on his short-term trips, but I was sure that was all God expected from me as far as mission was concerned. My husband understood, but he graciously asked me to pray that God would change my heart if He wanted us to go. I agreed to do that, because I already “knew” God didn’t have anything different for me. I began praying and He began changing my heart. I was able to see for the first time the difference between someone who does not know Jesus because they have little to no access to learning about Him and someone who has had the opportunity to accept His love and grace all their lives, but continues to treasure the world rather than desire to be rescued from it.

As I was studying the book of Hebrews, God was showing me the importance of longing for a better city and being able to let go of the comforts here because of what we have in store. He was teaching me about having faith in a God who had sworn by His own name (because there is no higher name to swear by) that He will keep His promises to those who love Him and something infinitely better is coming.

So…when Nick asked me to go on a short-term trip, I went. I worked it out for my sister to keep the kids, my husband sold his guns and guitar and bought me a ticket to Zimbabwe with him. The journal entry above is from that trip. It was nothing like I had expected. It was way worse and way more uncomfortable. From the food to the electrical outlets, everything was unfamiliar. And it scared me to death, because I knew it was a real possibility that God might want us to move there.

By the end of the week, my heart had softened somewhat and I was able to see some of the joys in being there. The primary joy was the people. The conversations. The wives who I had planned to teach about 1 Peter 3, but who instead asked me to teach about the resurrection and the age to come. The women who told me they do not covet anything about my life because I have everything I need, and thus no need to pray. I loved the image of God I saw in them.

But I came back from the trip still not quite ready to dive in. Maybe even a little more reluctant having seen what I would be getting into. A couple months later, I was reading an article about a woman in China who at 8 months of pregnancy was dragged from her home, beaten unconscious, and woke up with her dead baby by her side. I was overwhelmed by grief looking at this article complete with a picture that will be forever imprinted on my mind. All I knew to do was pray for her. “God, thank you for sending your Son to claim victory over sin and death. Thank you for the hope that we can have in these situations….” But then I stopped. This woman more than likely is grieving a level of grief that I pray I never will, but without the hope of the Gospel.

So I picked back up, “God! Send someone to share your good news with her! Send someone to tell her that she can see her baby again and that you will make all things right!” Wait. Here I was praying for God to send someone else to do something I myself was unwilling to do. So I continued, “Send me. Send us. We will go.” I went home and told my husband I was ready, I was being compelled by the Spirit and after a year of wrestling (and losing) I knew this was our Ephesians 2:10.

Now, here we are. We have been living in Zimbabwe for over a week. I had prepared myself to have the same emotions, feelings, and discomforts as my first trip. I was ready to battle those feelings with the truth that this is where my King had called me and told me to serve Him. But I haven’t had to. This is the same Africa that I first hated. The Africa where you open up a cabinet to find a wasp nest or a spider the size of your hand. The Africa where you drive down the road (on the left side) and see women carrying 100 lbs. on their heads and precious babies on their backs, no a/c, no TV, no ice at restaurants, no filtered water, and no one who “gets” you.

But I love it. The place is the same, but my heart is not. He has changed me, and this is the power of the Gospel that He gives us to die to ourselves so that we can live for Him. I pray God will use us to show His power to redeem lives from the pit and give purpose amidst suffering and hardships. Some may read this and say I’m too optimistic considering we’ve only been here a little over a week and haven’t yet experienced many of the hardships that will inevitably come. We haven’t had random power outages yet, etc.

But the point in writing this is not to talk about what an awesome missionary I am after having not really even engaged the culture or done any real missions yet. The point in writing is to take away the admiration for missionaries and point it where it is due. My heart is selfish, lazy, and longs for pleasure and comfort for myself alone. My heart hated Africa because it did not cater to my every whim, satisfy, and gratify every desire of my flesh. I am unfaithful. But the One who calls us is faithful, and He will do it. That is why I am confident that not only will we be okay here, but we will thrive even through the hardships. Because He is faithful. He will not call without equipping.

Most of the people in my life and most of you reading this are not called to international missions. You more than likely serve as a different part of His body. But no body part is unnecessary, and no role is easy. Every role carries heavy weight toward the same end…His glory. His name, and His goodness reaching the nations. Every role is difficult. Every role requires sacrifice and faith. There is no “easy” role in the Kingdom, because having a role in His Kingdom implies we have forsaken this present one. So it isn’t just missionaries who need to hear, “the One who called you is faithful.” Its the business man and wife who are called to use their resources to fund the mission, but constantly battle the temptation to indulge and spend God’s money on themselves. Its the pastor who is called to mobilize the church for the mission, but is tempted to tickle ears in order to keep people in the seats and build bigger buildings. Its the housewife who feels insignificant and is tempted to forfeit her role of praying for laborers. Its the teacher who is faithful serving God by serving often disrespectful students and is tempted to lose heart, not realizing there may be a Paul or Mary Magdalene in that room. The list goes on.

But the point is this, “If one member suffers, all suffer together; if one member is honored, all rejoice together” (1 Cor 12:26). We’ve often heard through this process of going, “missionaries are our heroes!” Well, I can say with sincerity that senders are mine. Thank you to all of you who are being faithful in your role so we can be faithful in ours. What a privilege to be part of this body. I cannot wait to see what He has prepared for those who love Him. So stretch your legs, grab some water, and let’s run this race together toward the prize to which we’ve been called. He is worth it and when we know what an honor it is to be known by Him and have a seat at His table, there is no such thing as sacrificing for His name’s sake.

How can we sacrifice something that was never ours? Comforts we are not entitled to? The only thing we are entitled to is an eternity in Hell. Yet He gave us what only He is entitled to. He is the only One who knows what it means to truly sacrifice. The only word to describe what we do, is privilege.

4 thoughts on “The One Who Calls”